On November 10, 1969, the first episode of Sesame Street aired. I was a 15-year-old and was completely unaware of the show until the summer of 1970 when I volunteered to screen incoming kindergarteners for vision problems. This was before kids attended preschool before entering kindergarten. My job was to show the soon-to-be kindergarteners a flashcard with the capital letter "E," telling them it was a table and they were to show me which way the legs were going. I had all these little kids telling me that it wasn't a table, but the letter "E." I was pretty amazed that they knew their letters and commented on it. A few mothers told me that the kids had been watching a show called Sesame Street.

Flash forward seven years and I now had a little girl that loved Sesame Street. We purchased several Sesame Street albums that she would listen to each day, including the Count climbing stairs, (One, two, three, four, five, six, seven, eight, nine. I climb the stairs one at a time.), and Just One Me.

In addition, we had a number of Sesame Street books, including The Ernie & Bert book, a story about a chain reaction of why Ernie wants Bert to put the pan on his head. It seems it is because Ernie broke the piggy bank, so he put the money in the cookie jar, causing Bert to inquire about where the cookies went and Ernie says he put them in the milk bottle. So Bert wants to know what happened to the milk and Ernie says he put the milk in the flower vase. After each time Ernie explains where he put something, Bert wants to know what happened to the item that was originally there. It goes on and one...the flower from the vase is in the kangaroo's pouch, the kangaroo's young one is in the bird's nest, the birds are in an ice cream cone, the ice cream is in the egg box, the eggs are in the soap dish, the soap is in the crayon box, the crayons are in the fishbowl, and the fish is in Bert's cowboy hat. Bert is pretty exasperated by this time and wants to know what is he going to wear when he plays cowboy. Ernie puts the pot on Bert's head and says "Ride 'em, cowboy!" My husband and I read this book so many times (my husband using his best Bert and Ernie voices), that even 40+ years later I can tell the story without reading the words. 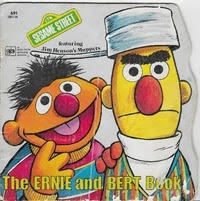 Now I'm a grandmother of seven and the youngest one is three and he LOVES Elmo. We watch lots of YouTube videos of Elmo and the other Sesame Street characters. He has a limited vocabulary at this time, but he imitates the characters' laughs and grunts and you know which character he wants to see. We dance and I sing along with the videos and this is one of his favorite activities for us to do together. I think I enjoy Sesame Street more now (when I have more time to sit and watch with my grandson) than when my daughter was younger and I would be cleaning or cooking while she watched the episodes.

By QueenShakeNBake June 07, 2018
June 6, 1944, also known as D-Day, is considered the beginning of the end of World War II in Europe. On this day in history, Allied troops (approximately 156,000) invaded Western Europe, completely overwhelming the German forces.

I became curious about the USS LST 383 and did some research. This ship was an LST-1 Class Tank Landing Ship which was built at Newport News Shipbuilding and Drydock Co. in Newport News, Virginia. It launched on September 28, 1942, and was com…
1 comment
Read more

By QueenShakeNBake May 11, 2018
With all the talk about immigration, immigrants, building a wall, or having to pass a test to come to the United States, I started thinking about my immigrant ancestors. They came for a variety of reasons, including to escape poverty, religious freedom, to avoid prosecution, and the promise of cheap land and a fresh start.

My earliest immigrant ancestors that I have found is probably one of the following:

Macuth Pratt who was born about 1595 and married in 1619 in  England, immigrated about 1637.John Pearson who was born 18 Jun 1615 in North Yorkshire, England who immigrated in  1637.Jeremie Swayne. No information is known about him other than he married a woman by the name of Mary and their son, Maj. Jeremiah Swayne was born on 1 March 1642/43 in Boston, Suffolk, Massachusetts, placing immigration before 1 March 1642.Thomas Starr who was born in 1565 in New Romney, Kent, England and died before 2 March 1640/41 in Dorchester, Norfolk, Massachusetts (no immigration record found), placin…
Post a Comment
Read more