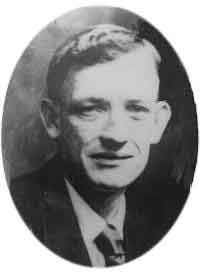 My maternal grandfather, Roy Clinton Thornton, was born at Berwick, Polk County, Iowa on 6 June 1885.  He was the son of  Martin Luther Thornton and Rebecca "Anna" Jones. He was employed as a miner at the time of the 1900 and 1910 U.S. Federal Census, living in the same household as his parents and siblings.
At the age of 27, Roy or LeRoy, as some sources list him, married Anna May Rouse at Des Moines, Polk County, Iowa on 15 May 1912. Roy completed only six years of school. His occupation at the time of his marriage was listed as a coal miner.
Roy and Anna had the following children :

Gets First Job In Five Years--Then Dies on Way to Work.
Roy Thornton, 51, of 4118 Bowdoin St., started from his home Monday morning to go to work at his first job in five years.
On his way to the job he suffered a heart attack. He died on his way to Broadlawns General hospital.
The job Thornton was to have started was at the Wood Brothers Threshing Machine Co., near E. Fourteenth St. and Aurora Ave.
During the time Mr. Thornton has been out of work, the family has been supported by three sons. Billy has a WPA job, Roy, Jr., is in a CCC camp at Centerville and Russell is in a CCC camp at Indianola.
Besides these sons, Mr. Thornton is survived by his widow and four other children, Virgil, Kenneth, Alta and Gladys.

Funeral services were being arranged at Hamilton's funeral home.1

By QueenShakeNBake June 07, 2018
June 6, 1944, also known as D-Day, is considered the beginning of the end of World War II in Europe. On this day in history, Allied troops (approximately 156,000) invaded Western Europe, completely overwhelming the German forces.

I became curious about the USS LST 383 and did some research. This ship was an LST-1 Class Tank Landing Ship which was built at Newport News Shipbuilding and Drydock Co. in Newport News, Virginia. It launched on September 28, 1942, and was com…
1 comment
Read more

By QueenShakeNBake December 17, 2018
I previously posted about my Thornton relatives and their land purchases in Polk County, Iowa. Today I'm going to take you back to the beginning of the Thornton family that I have proven. Thomas Thornton (6th great grandfather) was born about 1709, the son of William Thornton. About 1734 he married Martha  Boykin. Thomas died in 1762 in Northampton, North Carolina. It is believed that Thomas and Martha converted to the Quaker religion, probably converting in Virginia. Before this, they were part of the Puritan sect of the Church of England. They left Virginia and went to North Carolina, among a large Quaker neighborhood, including the Cooks, Wrights, and Wells, all part of my Quaker heritage. Thomas and Martha had two known children: Thomas A. (b. about 1739, d. before April 1783) and Rebecca Thornton (b. 21 May 1743). Thomas A. was my 5th great-grandfather and Rebecca both a great-aunt and my 5th great grandmother, hence one part of my twisted tree. Thomas A. Thornton (5th great…
Post a Comment
Read more