June 6, 1944, also known as D-Day, is considered the beginning of the end of World War II in Europe. On this day in history, Allied troops (approximately 156,000) invaded Western Europe, completely overwhelming the German forces. 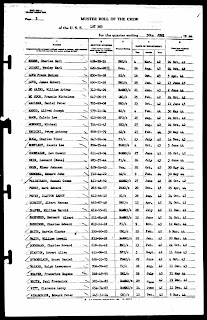 I became curious about the USS LST 383 and did some research. This ship was an LST-1 Class Tank Landing Ship which was built at Newport News Shipbuilding and Drydock Co. in Newport News, Virginia. It launched on September 28, 1942, and was commissioned USS LST-383. During World War II, this ship was assigned to the Europe-Africa-Middle East Theater. Campaigns it participated in included Sicilian occupation July 9-15, 1943; Salerno landings September 9-21, 1943, Anzio-Nettuno advanced landings January 22-March 1, 1944, and Invasion of Normandy June 6-25, 1944.

On November 20, 1944, the USS LST 383 was decommissioned and transferred to the United Kingdom and commissioned into the Royal Navy as HM-LST-383 and participated in the Malaya Invasion. The United Kingdom didn't keep it very long, either, transferring and selling it to the Netherlands East Indies Maritime Customs on June 10, 1946. The USS LST-383 earned four battle stars for World War II service.

Further research showed Wesley was transferred on the U.S.S. Wyoming for the month ending May 31, 1945, date of sailing from NOB, Norfolk, Virginia to ATB, Little Creek, Virginia. He still is on the U.S.S. Wyoming on the Report of changes for the month ending April 30, 1945, as received on April 22, 1945, from ATB, Little Creek Virginia. The last record I have been able to find shows him on the USS LSM-R 504's Report of Changes on June 11, 1945, as received.

I came across your web page doing my ancestry research. It appears my father William H. Shafer served with your father on LST 383. I have a scrapbook with pictures of some of the crew and the LST 383 during the war. I also recently transcribed my fathers LST 383 diary. Feel free to contact me if you are interested.

By QueenShakeNBake December 17, 2018
I previously posted about my Thornton relatives and their land purchases in Polk County, Iowa. Today I'm going to take you back to the beginning of the Thornton family that I have proven. Thomas Thornton (6th great grandfather) was born about 1709, the son of William Thornton. About 1734 he married Martha  Boykin. Thomas died in 1762 in Northampton, North Carolina. It is believed that Thomas and Martha converted to the Quaker religion, probably converting in Virginia. Before this, they were part of the Puritan sect of the Church of England. They left Virginia and went to North Carolina, among a large Quaker neighborhood, including the Cooks, Wrights, and Wells, all part of my Quaker heritage. Thomas and Martha had two known children: Thomas A. (b. about 1739, d. before April 1783) and Rebecca Thornton (b. 21 May 1743). Thomas A. was my 5th great-grandfather and Rebecca both a great-aunt and my 5th great grandmother, hence one part of my twisted tree. Thomas A. Thornton (5th great…
Post a Comment
Read more

By QueenShakeNBake December 21, 2018
My last post was about the union of Nathan and Charity (Cook) Thornton, second cousins. Today's post will be on their daughter-in-law Rachel Haworth (wife of Riley Thornton). Let me see if I can explain these next twisting braches of my family tree.

And before I forget it, Ruth Wright and Charity Cook were 1st cousins once removed through the Wright family. John Wright, the patriarch of the family had a number of children, including  Charity Wright b. 12 Nov 1742 and James Wright b. 28 May 1753.

James Wright, their son, married Sarah Haworth (another twisted branch of my tree) and they had a daughter, Ruth Wright, making her granddaughter of John Wright.